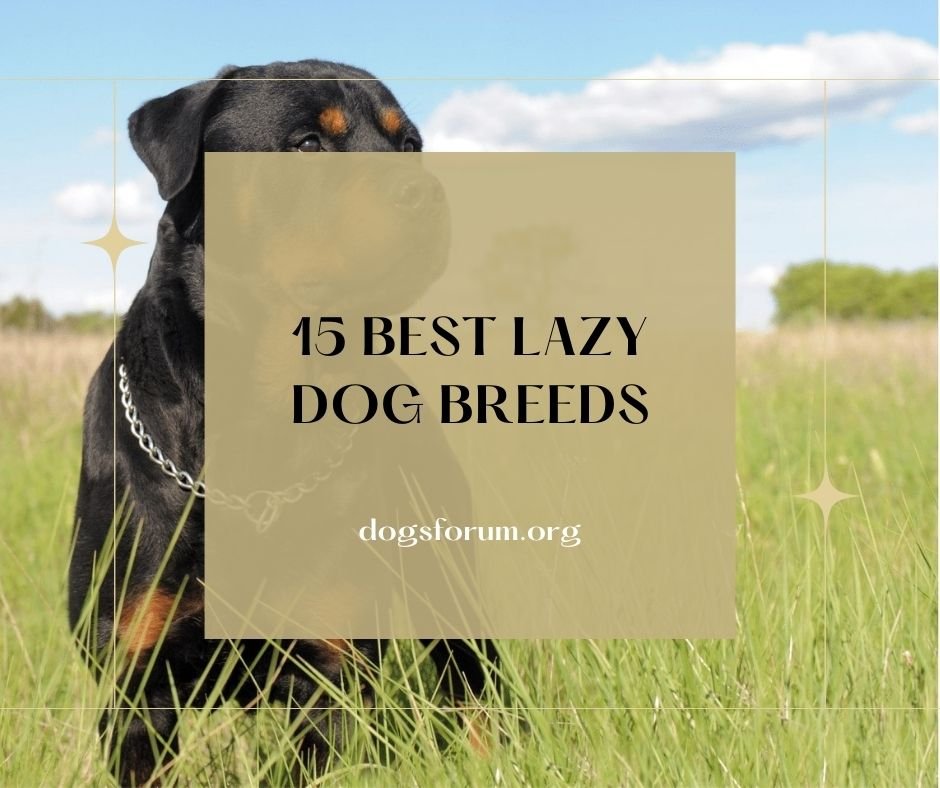 In this article, we will cover the best lazy dog breeds. Dogs can be the best companions. They are cute, playful, and loyal.

However, not all dogs are energetic enough to play with their owners the whole day. Some breeds just want to relax on the couch or even sleep through the day. We will show you the best lazy dog breeds that love doing nothing except eating and snuggling at home!

The best lazy dog breeds are the ones that don’t require a lot of exercises. These breeds spend most of their days sleeping or lounging around.

The Cavalier King Charles Spaniel is a small dog breed that has been used as a companion and family pet for over 400 years. The dogs have long hair and short legs, and they come in a variety of colors.

The Cavalier is an affectionate breed that does not bark much, which makes them suitable for apartments and houses. They are very playful and usually get along well with other pets.

The English Bulldog is a friendly, courageous, and determined dog. It is known for its short face, heavy body, and round, wide head. The English bulldog has a thick coat that can be red, fawn, white, black, or even brindle.

The muzzle of this breed is quite broad with a wrinkled forehead and a nose that is often black. The ears are smaller than the average dog’s ears and they are set low on the head. The tail is usually docked.

The Miniature Pinscher is a small breed of dog that has a “foxy” appearance. It is one of the smallest breeds in existence and was bred to be an animal companion. The American Kennel Club (AKC) registers over 1,000 new puppies every year, making it the 19th most popular breed in the United States.

The Min Pin is a lively dog, with a personality that makes them suitable for companionship or show. They get along well with older children and other dogs but can become confrontational if provoked. A Min Pin will chase a cat if

Most people are not familiar with the Italian Greyhound, but they should be. The breed is a fantastic companion dog, and one of the best lap dogs around. It’s also a great option for allergy sufferers, as it sheds very little and has extremely low allergy-causing dander.

The Italian Greyhound has been around for centuries and was bred in Italy for companionship. As time went on, it became a popular pet across Europe, and eventually the United States.

The Pug is a breed of dog with physically distinctive features of a wrinkly, short-muzzled face, and curled tail. Pugs are known for their friendly personality and good-natured demeanor. Tempered for companionship, the Pug is a natural for families, especially those with small children.

Pugs are relatively easy to care for because of their compact size. They do not need lots of exercises and adapt to indoor life quite easily. Their short snout makes them prone to breathing problems so it is important to make sure they are well-ventilated and out of extreme temperatures.

Shih Tzus are one of the most popular dog breeds in the world. They have been a part of Chinese royalty for centuries and have become famous worldwide after being given as gifts to celebrities and politicians. Their popularity has also made them one of the most expensive dog breeds.

The Shih Tzu is a small, compact breed that matures quickly. It is appealing because of its compact body and its long, flowing coat. The coat is easy to take care of, needing a weekly brushing with a rubber brush and grooming every couple of weeks to keep it looking great. If you are looking for a small

Basset Hounds are a unique dog breed. They’re small, but they have a large personalities. Their facial and body structure is very distinct and their floppy ears give them an adorable appearance. This makes them one of the most popular breeds out there.

Boston Terriers are energetic, fun-loving dogs that adore their owners and make wonderful companions. They may be small in size, but they are big on personality. Boston Terriers were originally bred to hunt. They have a keen sense of smell and can handle any prey they pursue.

They will chase smaller animals with great determination, but they never get lost in the process. The Boston Terrier is a loyal family pet that is known to follow children around the house. They love human attention and will do just about anything for it. This breed is also very intelligent, so training them is a breeze.

The Chow Chow is a dog breed that originated in China. It was originally bred for hunting and guarding, and it has a very distinctive coat. Today, the Chow Chow is popular as a family pet, but it is also used as an assistance dog due to its intelligence and natural protective instincts.

Chow Chows are affectionate dogs, but they tend to be dominant. They need lots of mental and physical stimulation to avoid developing destructive habits. Although they are not prone to being aggressive with humans, they can be aggressive toward other dogs. As such, it’s important to socialize them with other

The Bullmastiff is a large breed of dog developed in England in the 19th century, during the Victorian era, when “bull-baiting” was still a legal sport. The original Bullmastiff was a cross between the Old English Mastiff and various Bulldog breeds.

Bichon Frise is a small, hypoallergenic dog originating from the Mediterranean coast of France. They are known to be kind, gentle, and playful. Bichon Frise is also very smart and loyal. They have a silky coat that comes in white with cream, gray, or apricot markings. The hair on their face forms a mustache and beard-like appearance which gives them an older look compared to other dogs of similar size.

The Maltese are a hypoallergenic breed of dog in the Toy Group. The breed has a life span of about 15 years. The Maltese are one of the ancient dog breeds, and archeological evidence suggests that dogs closely resembling the modern-day Maltese have been around for over 2,000 years.

The breed has been popularized by royal owners throughout history, and references to the dog can be found in Greek and Roman literature. One of the most famous royal owners of the Maltese was Marie Antoinette, who received several as gifts from French nobility during her marriage to Louis XVI

Dachshund, a short-legged dog breed of German origin, is a fearless hunter which has originated in the 17th century. Because of their long back and short legs, Dachshunds were often thought to be the “perfect” hunters for badger burrows.

Scent hounds come from France and were known as “hot on the trail” dog breeds because they would follow a scent relentlessly. The word “Dachs” means badger in German, and the word “hund” means dog in German. Here is a sample outline for an essay:

Yorkshire terriers are small dog breed with an average life span of 15 years. They are the best dogs for people who live alone or have minimal free time. They need only short walks, and they do not need much exercise outside of that time.

This breed is also wonderful for apartments because they have a tendency to bark less than other breeds and are able to live happily in smaller spaces. They are a good dog for families with children, as well. In general, they get along well with other pets and especially if they were introduced at a young age.

The Pomeranian is a fluffy breed that loves to play and receives lots of attention from family members. They’re alert and ready for action at all times, so they aren’t a good fit for families with small children or other pets because they might be easily startled.

A daily walk will keep them healthy, but they can also be energetic indoor dogs if they get enough exercise. Pomeranians will need grooming every few months to maintain their lustrous coats. They have a typical 12-15 years and do best when kept as indoor pets in safe environments.

The best lazy dog breeds are ones that are low-maintenance and easy to care for. With the right dog, you can have a pet that is always happy to see you, no matter how long it’s been since you last saw them. If you want to learn more about these sleepy dogs, please feel free to read: 12-most-popular-small-dog-breeds.