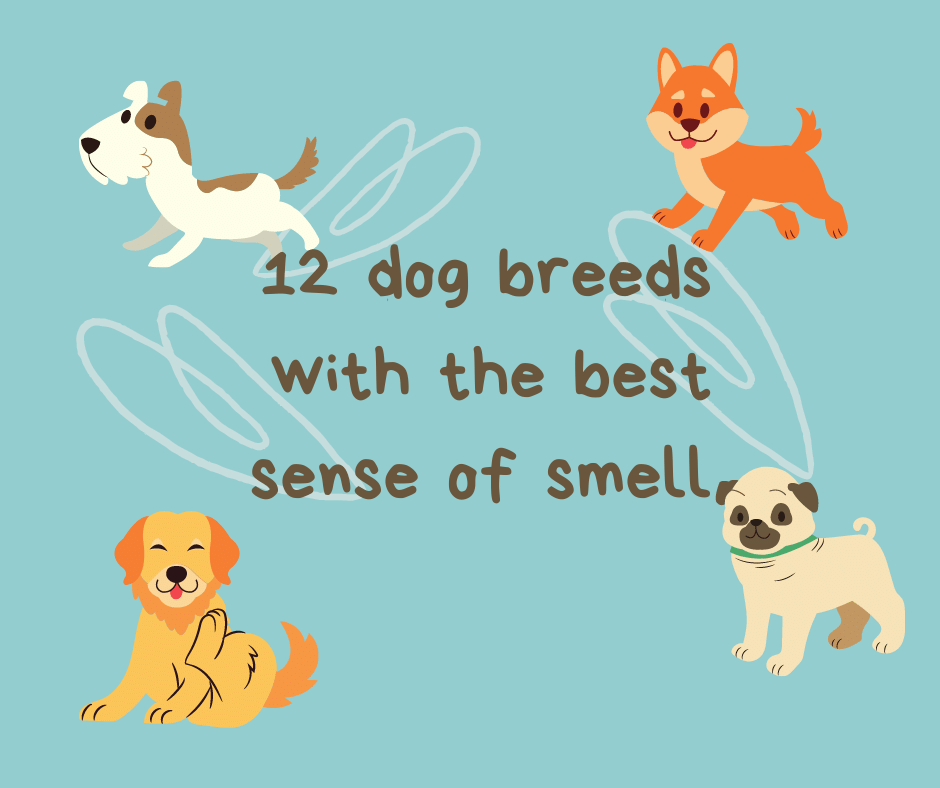 The smell is a dog’s primary sense out of the five senses. Dogs enjoy sniffing. Their incredible sense of smell is what makes them even more capable. Now let’s see in detail what makes dogs sniff.

Dogs enjoy sniffing. The use of their nose is frequently the highlight of their walks, if not the entire day. Their “nosiness,” on the other hand, can be difficult for owners to understand and, at times, embarrassing. Even though humans don’t fully comprehend all of its capabilities, the canine nose is a great smelling instrument. Here are some of the reasons why dogs sniff.

The 12 dog breeds with the best sense of smell

Dogs are known for having many unbelievable characteristics but surprise the most is their incredible sense of smell. Some breeds have hundreds to thousands of times higher odor-detecting abilities than humans. These incredible dogs also assist humans in key professions such as law enforcement, military, rescue, tracking, and detection. Here is a list of the top 12 dog breeds with exceptional senses of smell.

In terms of size, the dachshund may be the hardest of all dogs. These tenacious dogs, bred to hunt badgers above and below ground, would grab onto the badger in its underground den, then the hunter would drag the couple out by the dachshund’s tail. The larger dachshunds became wild boar and badger hunters, while the smaller dachshunds pursued hares and foxes as the breed grew in size. Because dachshunds have around 125 million smell sensors in their noses, they excel at Earth Dog Treks, field trials, obedience, and even agility. They make wonderful family pets because of their upbeat attitudes.

The Golden Retriever is much more than a pretty face! They can utilize their noses to locate people, paths, and even food. They detect odors in the air rather than on the ground and are in high demand for locating people after a ground trail has been lost. They are a child’s best barrier against allergy ingestion; they can smell a peanut from a mile away!

The breed was created in Scotland by combining Lord Tweedmouth’s “yellow retriever” with the Tweed Water Spaniel, then adding Irish setter and bloodhound pups, who were subsequently crossed back to the now-extinct Tweed Water Spaniel. Active goldens make outstanding obedience, agility, and hunting dogs, as well as wonderful family pets, thanks to their happy attitudes and enthusiasm to please.

English pointers are known for their sniffers, and they are probably the most expected entry on the list of dogs with the best sense of smell. These energetic pups thrive in the country, where they can run about and play all day. When it comes to the English Pointer, there are many “pros” to consider. They are affectionate, friendly, intelligent, and easy to teach. This breed of dog is sensitive. They require an experienced trainer who understands how to efficiently train while remaining positive.

The German Shorthaired Pointer is a versatile hunter as well as a great household pet. This breed is known for its unusual characteristic of remaining silent while tracking a smell. Shorthaired pointers can also move fast down the trail thanks to their robust legs. They’ve been observed hunting both birds and small mammals.  German Shorthaired Pointers are very trainable due to their willingness to learn. They make excellent companions for active families because they are devoted and affectionate.

All the breeds of coonhounds — Black and Tan, Bluetick, English, Plott, Redbone, and Treeing Walker — all have incredibly effective noses, but they sniff in different ways. Some have “hot” noses, which means they perform best on new trails, while others are “cold-nosed,” meaning they can easily follow an old, or “cold,” route. When all else fails, this breed gets summoned. They are the only ones who can sense the “cold trail,” which no other person or puppy can. This trailing dog circles an area, zigzagging back and forth in an attempt to lead their human to their prize—the missing person. They’re also excellent family pets.

The English Springer Spaniel, unlike many other sporty and active breeds, is eager to please and simple to train. It uses its nose to detect game fowl and flush (spring) them out, and it is one of the canines with the best sense of smell among Spaniels. They’re popular on the trail and at home, and there are two types: an energetic outdoor kind and a calming indoor type.

The Belgian Malinois excels at sniffing out trouble. The Belgian Malinois is a lighter-framed, agile dog with a similar appearance to the German Shepherd Dog. Herding, agility, Schutzhund, tracking, sledding, and obedience are among the skills they excel in. The Malinois has been trained to sniff out bombs, drugs, bed bugs, even prostate cancer by military and police forces all over the world.

This is an energetic, intelligent breed that requires a job or difficulties will arise. In general, these vigilant dogs are wary of strangers. They are a protective breed of family, but not particularly violent.

In the United States, this is the most popular dog breed. This popularity can be attributed to a number of factors. The Labrador retriever is a wonderful household companion, as well as a service dog, show dog, and sniffing dog. Labrador retrievers are one of the few breeds with the temperament and ability to perform a variety of roles. This breed’s good disposition and keen sense of smell enable it to make significant contributions in areas such as search and rescue, as well as drug and explosive detection.

German shepherds are unrivaled in their flexibility. Well-trained German Shepherds have demonstrated their abilities in a variety of professions, including law enforcement, military duty, search and rescue operations, bomb and drug detection, and family security. They have a strong protective instinct and are loyal, courageous, intelligent, and attentive.

A German Shepherd’s nasal cavity includes 225 million smell-sensitive cells, which is surprising. That’s over 45 times greater than the average human’s. A well-trained German Shepherd can distinguish between a variety of odors.

The Beagle, while being one of the smaller hound breeds, has just as many scent receptors as the German Shepherd. Many of the cheerful tiny dogs are attracted to scents in the air and on the ground. Because of his scenting skills, the Beagle is popular among hunters as well as the USDA’s Animal and Plant Health Inspection Service, which uses the dogs to identify contraband (particularly food items) in airports. Beagles, after more than a year on the job, have a 90% success rate and can detect approximately 50 different odours.

The Basset Hound is a hound dog with small legs and long dangling ears that have a characteristic appearance. This breed was developed to trap rabbits and has great scenting abilities. In fact, only the bloodhound has a better sense of smell. They have the ability to process a large variety of scents at once. Also, if a scent appealed to him, this tenacious breed would begin following it on his own. As a result, basset hounds require special attention from their owners.

This gigantic dog has more scent receptors than any other breed, with 300 million. He is well-known for his man-trailing ability, and his evidence is accepted in court. Bloodhounds can not only track down a scent on the ground, but they can also track down a scent in the air. With a wide, long head, large, open nostrils, long ears that sweep the scent upward from the ground, and a cape of loose skin around the head and neck to trap and keep the scent, they are built to be the perfect tracking dogs, just like their cousin the Basset. Finally, the bloodhound’s stamina and perseverance make him an excellent trailing dog.

When it comes to our dogs, they possess a variety of skills that we believe to be rather outstanding. Their incredible sense of smell is another superpower that ranks high on that list. Of course, certain breeds are better known than others for their sniffers. However, all the above 12 dog breeds have an incredible sense of smell, making it easier for you to choose.